Referencing the painted landscapes of fellow Siegen-born artist Peter Paul Rubens, Baruth’s compositions make use of the authentic ‘aura’ of painting. While the uniqueness and artificiality of painting cause viewers to pause and reflect, photography’s ubiquity in mass media means that viewers absorb photographic images as ‘reality,’ without further reflection. But these images crudely layer together natural aspects of Siegen and Flemish Brabant (where Rubens spent his final years) with figures engaged in contemporary leisure activities. It produces an uncanny effect. By purposefully leaving his manipulation of the photographs evident, Baruth lays bare their constructed nature, and obliges his audience to dwell on their meanings. The disjointed images unsettle us and force us to reconsider the barrage of mass media images, and the unspoken messages contained within them which we uncritically consume.

Unlike Rubens’s pastoral scenes, Baruth’s figures have no relation to the natural settings surrounding them. Nature acts as a mere stage, an idealised backdrop for the activities of these alienated pleasure-seekers. Baruth thus questions our relationship to nature, and our historic need to control and colonise it.

By reinterpreting historical landscapes with contemporary players, Baruth allows his viewer multiple perspectives and ways into understanding these scenes. He ‘invades’ this ‘foreign’ past, manoeuvring his viewer to question not only perceptions of the past, but at the same time, perceptions of the present and of the future.«
(Layla Bloom, Curator Fine Arts, Leeds Art Gallery, Leeds, UK)

»Positioning the maze of virtuality in front of an art-historical backdrop is a topic also chosen by Marc Baruth, whose art deals with the venerable heritage of Rubensian landscape painting. Employing titles such as “The Pond in the Woods” or “Homecoming After The Harvest”, Baruth assembles sunny vedutas which, upon closer inspection, make their beholders’ skins crawl. In the pictures, a bunch of modern leisurepersons hike, jog, cycle, and camp in completely synthetic, computer-generated idylls: a panopticon of rootlessness.«
(Andreas Langen, Stuttgarter Zeitung, March 2007)

»The people in these landscapes are clearly contemporary individuals – they wear weatherproof outdoor clothing, carry backpacks filled with necessary supplies, get refreshment from bottled mineral water, or perambulate their surroundings supported by “nordic walking” sticks. The landscapes themselves, however, are peculiar – well-regulated parks have been blended with wildly romantic, natural scenery.

These images’ dully argentine skies appear to commemorate both landscape paintings of centuries past, and the fruitful Hobbit Shire from the classic fantasy tale “The Lord of the Rings”. It seems as if the modern wayfarers in the photographs have lost their way.

Young photographic artist Marc Baruth – a crafty engineer of pixelled pictures – turns modern contemporaries into tiny genre figures lost in timelessly arcadian naturescapes based on scenery that can be found in Flemish Brabant (Belgium) and his native Siegerland (Germany). At the same time, Baruth – a graduate of the Dortmund University of Applied Sciences – newly interprets a topic as ancient as art itself: the tension that exists between man and nature. Baruth is one of nine young and highly promising German photographers whose work is now on public display at the House of Photography at Hamburg’s Deichtorhallen.«
(taken from Hannoversche Allgemeine Zeitung, Feb 2, 2007)

»It was my intention to return to the town its great lost artist figure«, says Marc Baruth. Baruth, a photographic artists aged 31, is talking about the Baroque painter Peter Paul Rubens, who was born in Baruth’s home town of Siegen (located in the Westphalia region of Germany) in 1577. »Unfortunately, the baby Rubens spent just a couple of months here before absconding – first to Cologne, and finally to Belgium.«

For that reason, Baruth always sensed a slight »desperation« in the way that Siegen nevertheless continuously tags itself as the »Rubens City«; he admits that with his diploma thesis in his major subject Photography, »The Prodigal Son«, gently satirizing that attitude was also a small part of what he intended to express.

At first glance, it all seems decidedly unambiguous: Baruth’s pictures are, in fact, instances of painted fine art. Their composition and line management can actually be observed elsewhere: »I have created surreal landscapes by means of photographic collage that borrow from existing Rubens paintings«, the photographer explains. Indeed: Rubens’ »Pond in the Woods« is similar to Baruth’s picture from the way a birch tree is positioned on the edge of a forest to the arrangement of the clouds – and yet, something is different, as Baruth has replaced Rubens’ peasant women with their jars and cows by a jogger taking a deep draft from a plastic bottle. In »Coming Home From the Harvest«, Baruth exchanged the carriages on the left-hand edge of Rubens’ original for children with bikes, and the harvest workers for a young family. »That way, I transported those ancient, well-loved nuggets into the modern age«, Baruth says. Apart from that, he insists on having remained true to every detail: »I combined countless photographs from the Siegerland and Flemish Brabant, which was where Rubens painted. Not a single tree exists in these pictures the way we would normally see it, having been pieced together from four or five different elements.« In a similar manner, rock ledges have been composed from images of loam, stones, or grass.

As Marc Baruth is primarily an artist, he has little interest in documentary photography. »My actual work begins at the computer; I’ve always been fascinated by manipulation of all kinds«, he says. »Even in the Old Masters’ paintings, you can find elements that constitute a breach of reality.« In his work, Baruth expands on that realisation, transfers seemingly well-known themes into the present, and plays with the beholders’ expectations. While from afar, »The Watering Place« may look similar to Rubens’ eponymous painting, it becomes clear upon approaching that something is not quite right – nature, which humans once used mostly agriculturally, has been invaded by modern-day gentlefolk of leisure.

»To me, today’s relationship between man and nature is almost completely devoid of meaning«, states Baruth, who was nonetheless unable to deny himself the preservation of one of Rubens’ sheep in his picture. The photographer would like contemplators to closely approach his works, to look for structures and irritations – as one would in the case of a painting.

When photography was invented in the 19th Century, it was assumed that painting would soon become obsolete. Both art forms continue to exist side by side, however, and Marc Baruth has dared to blur the boundaries between the two. For this, he has received the 2006 Photovision Award for young photographers on the topic of »Home«. In his own words: »When I handed in the finished work, I knew that this idea was either worth a prize, or so absurd that I would fail immediately.« 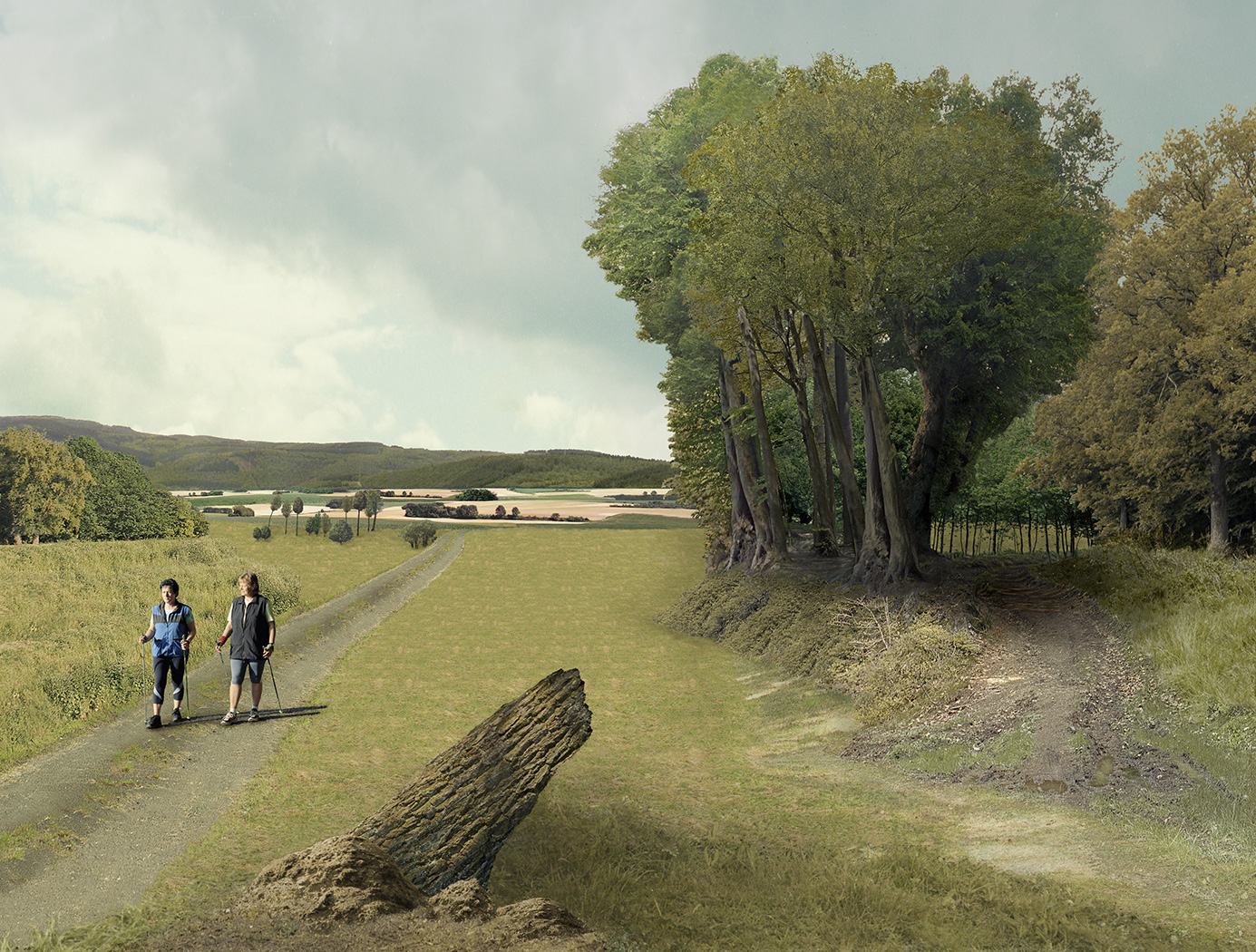 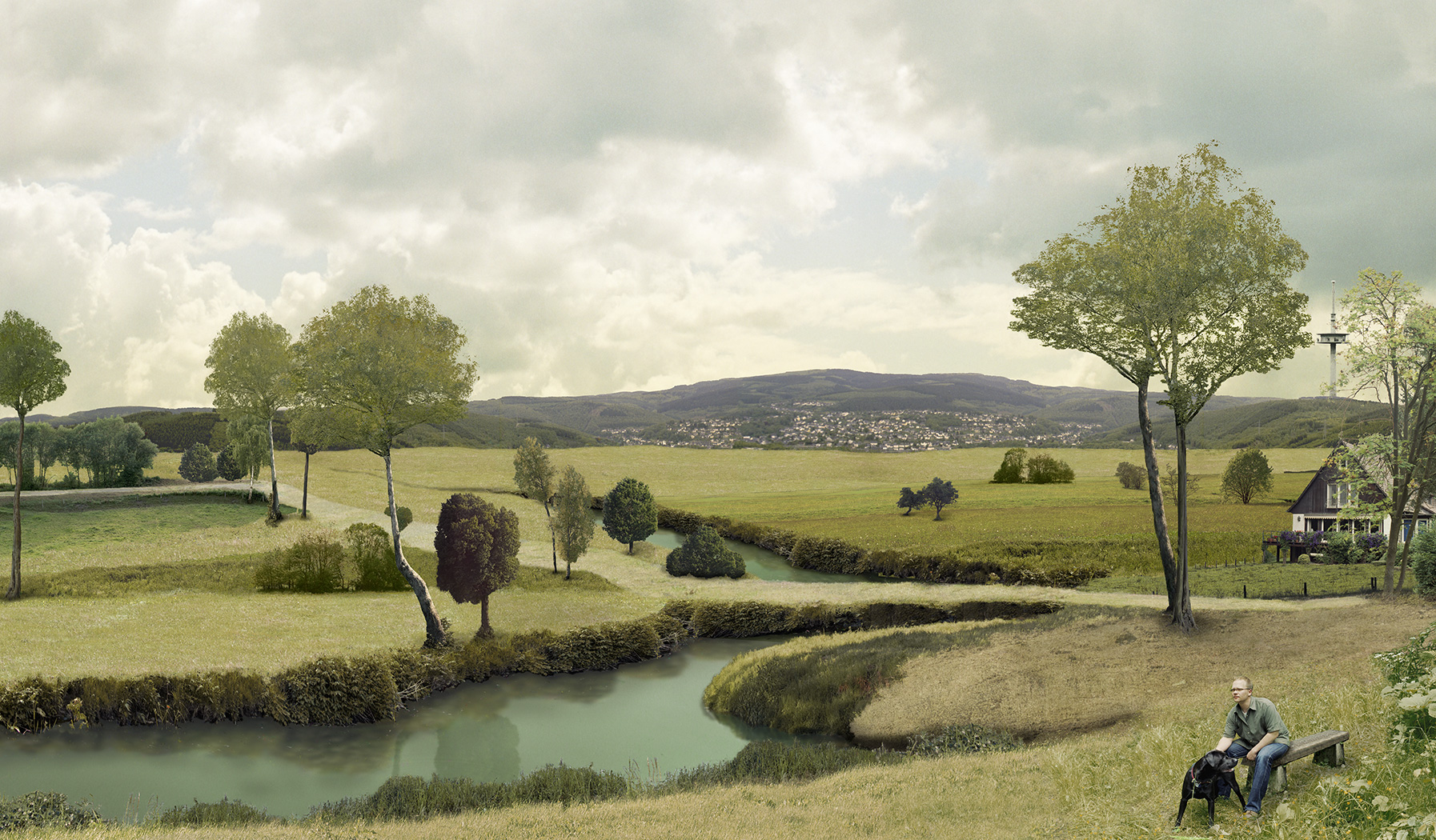 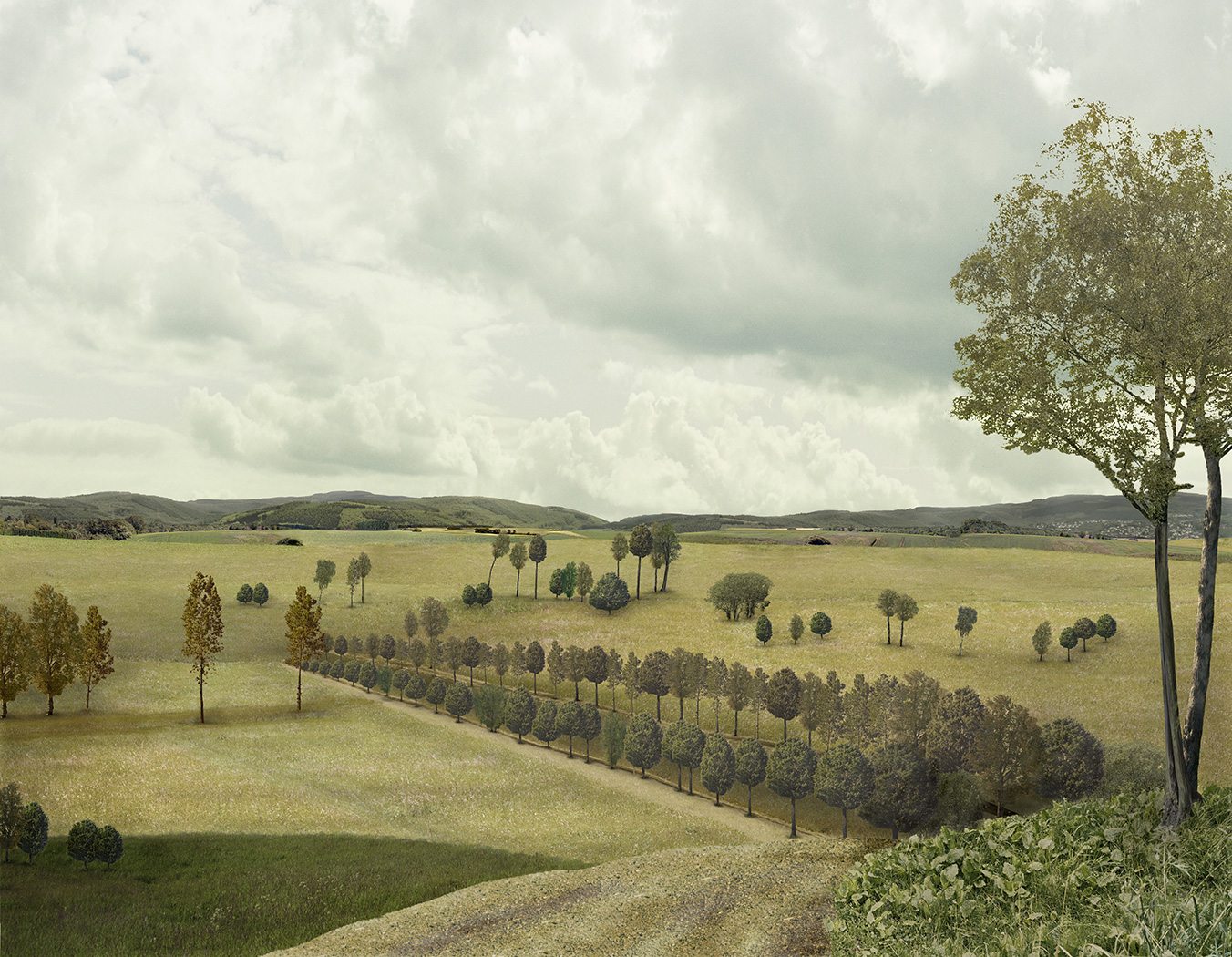 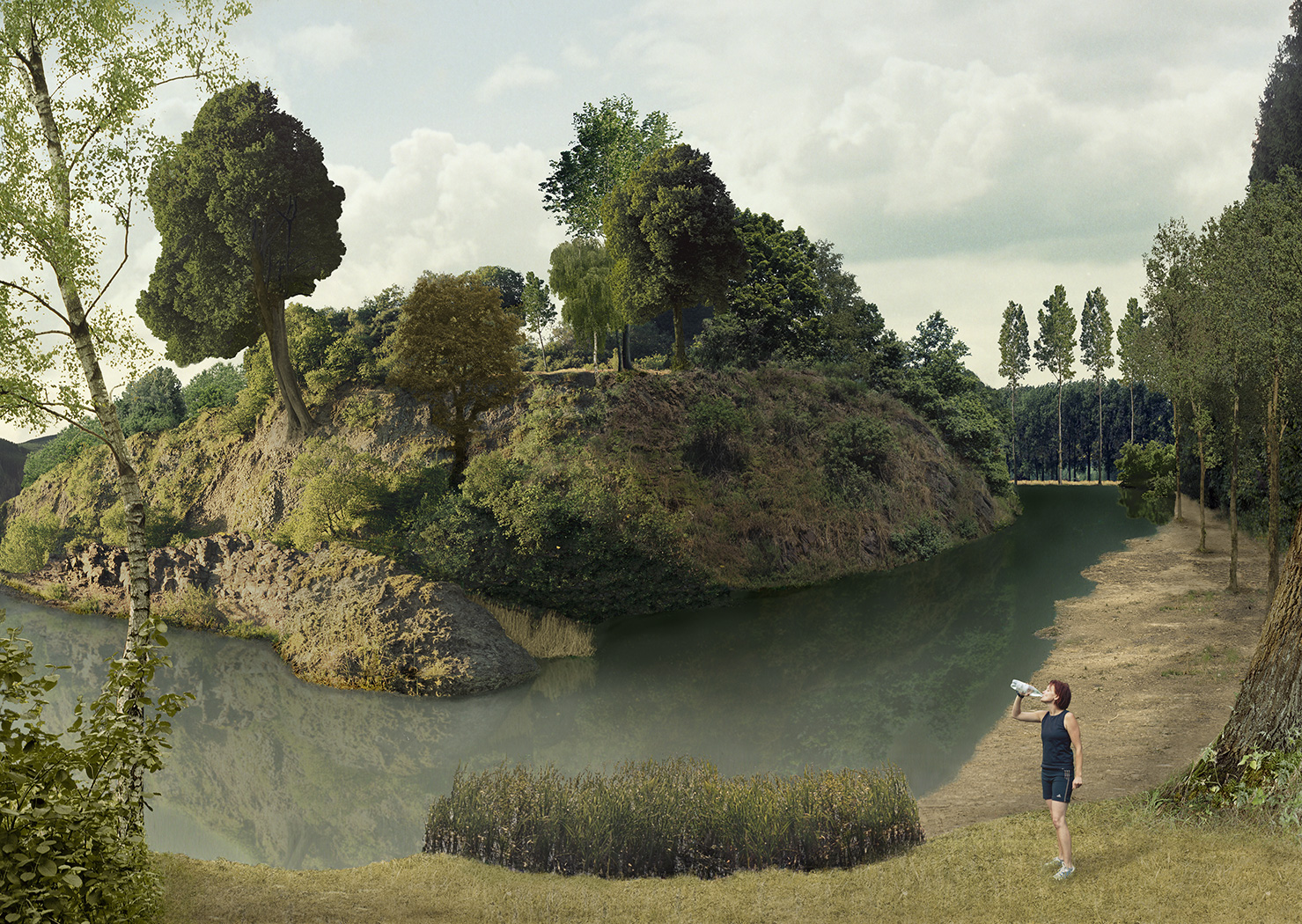 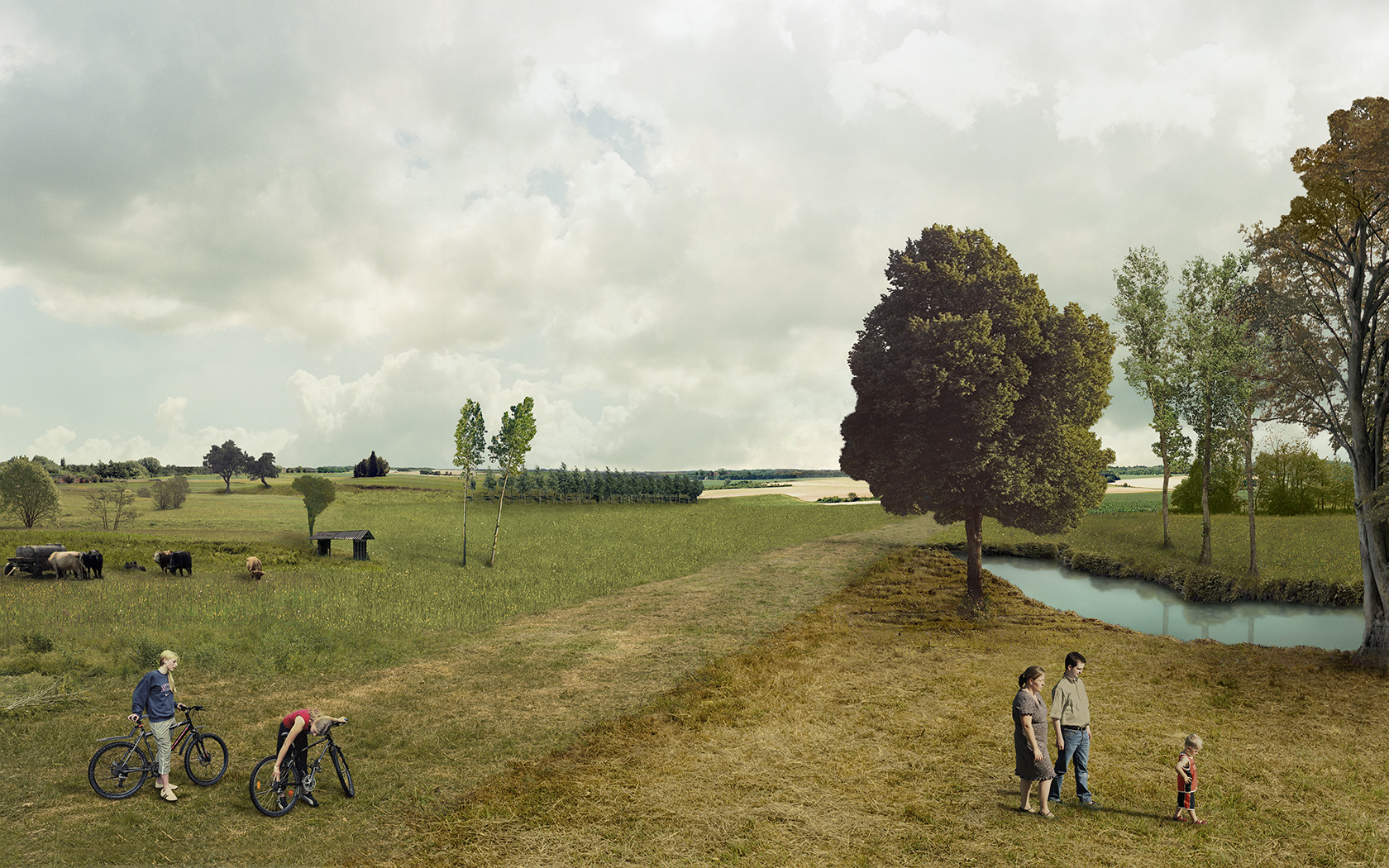 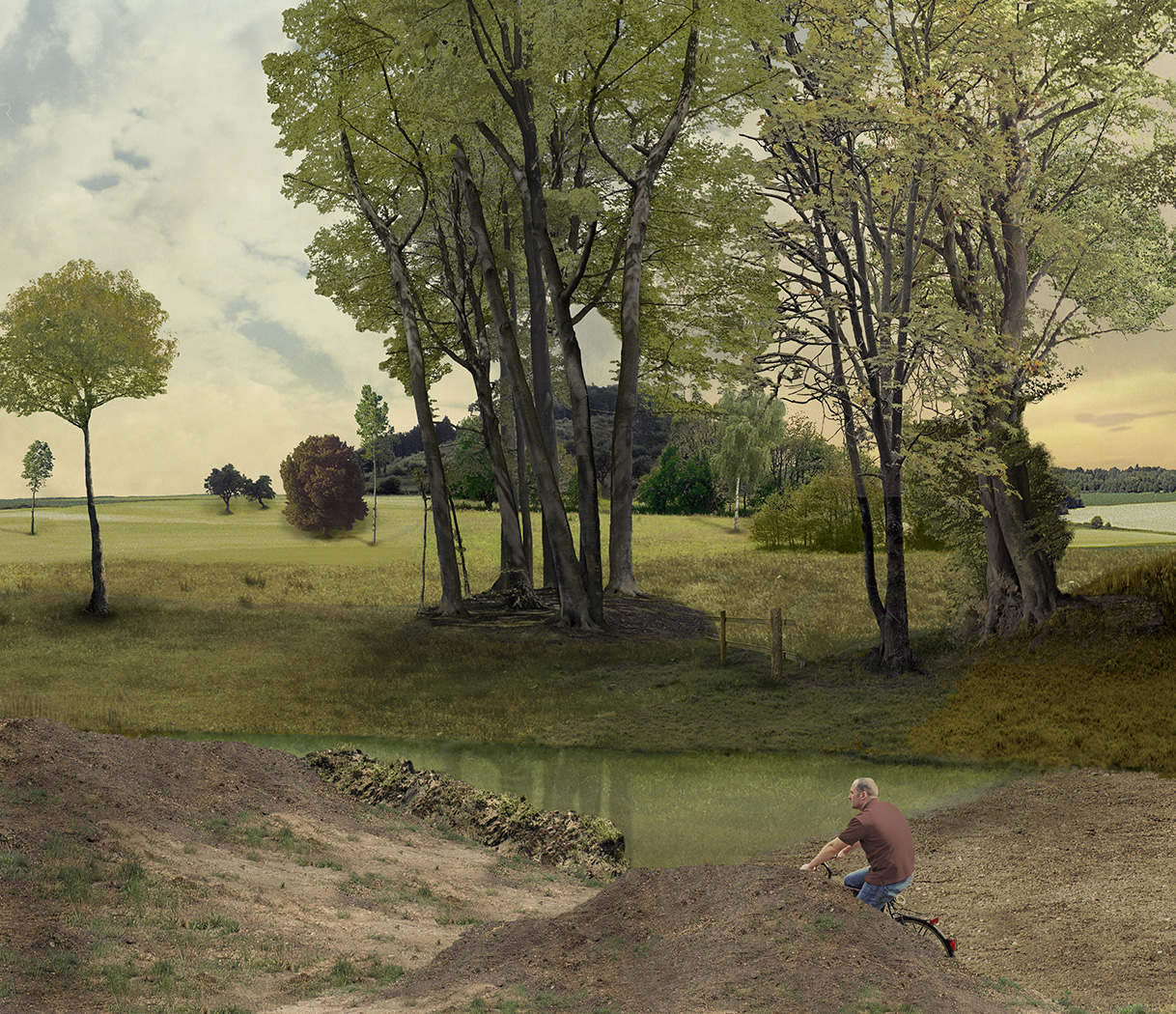 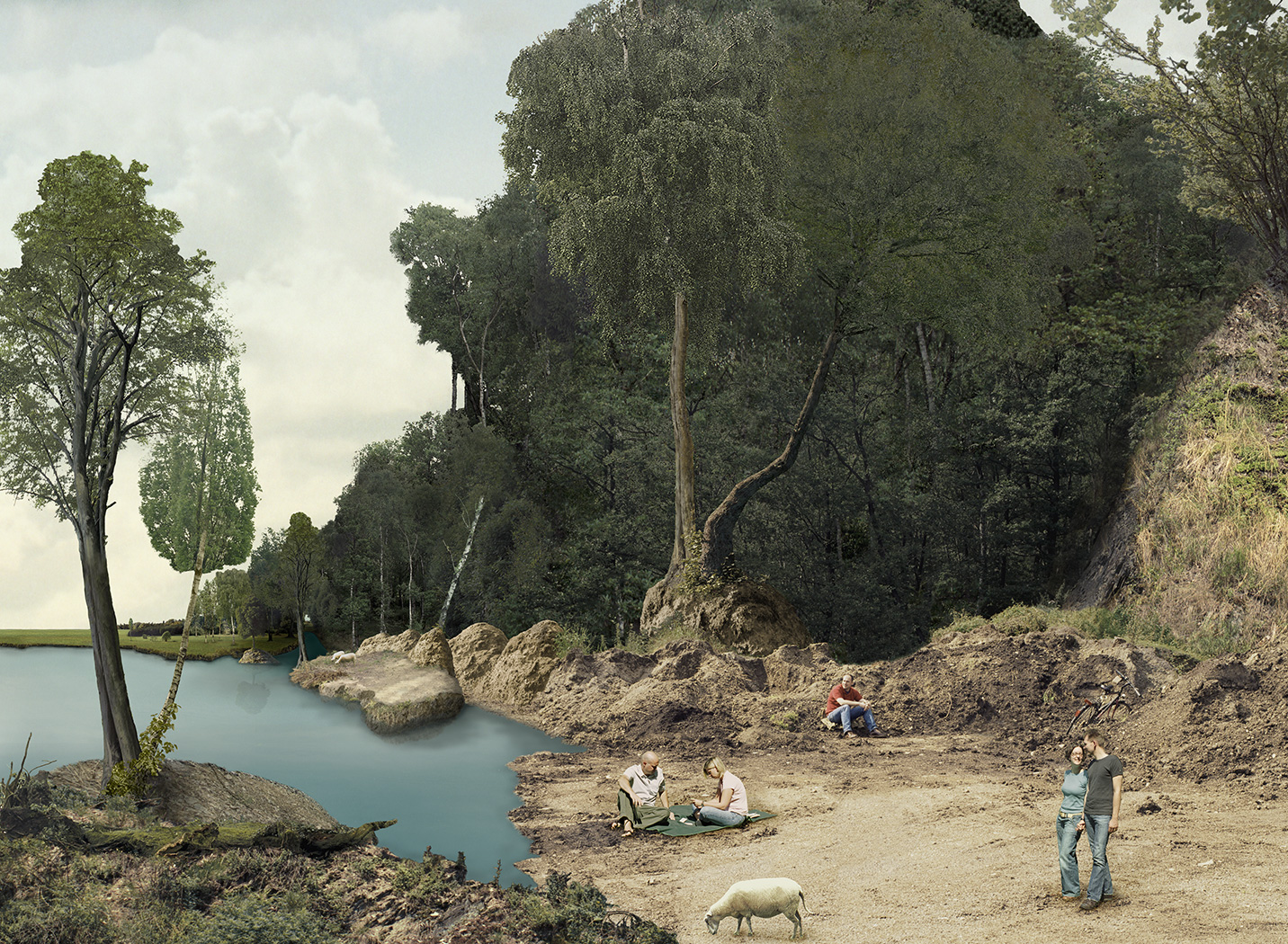 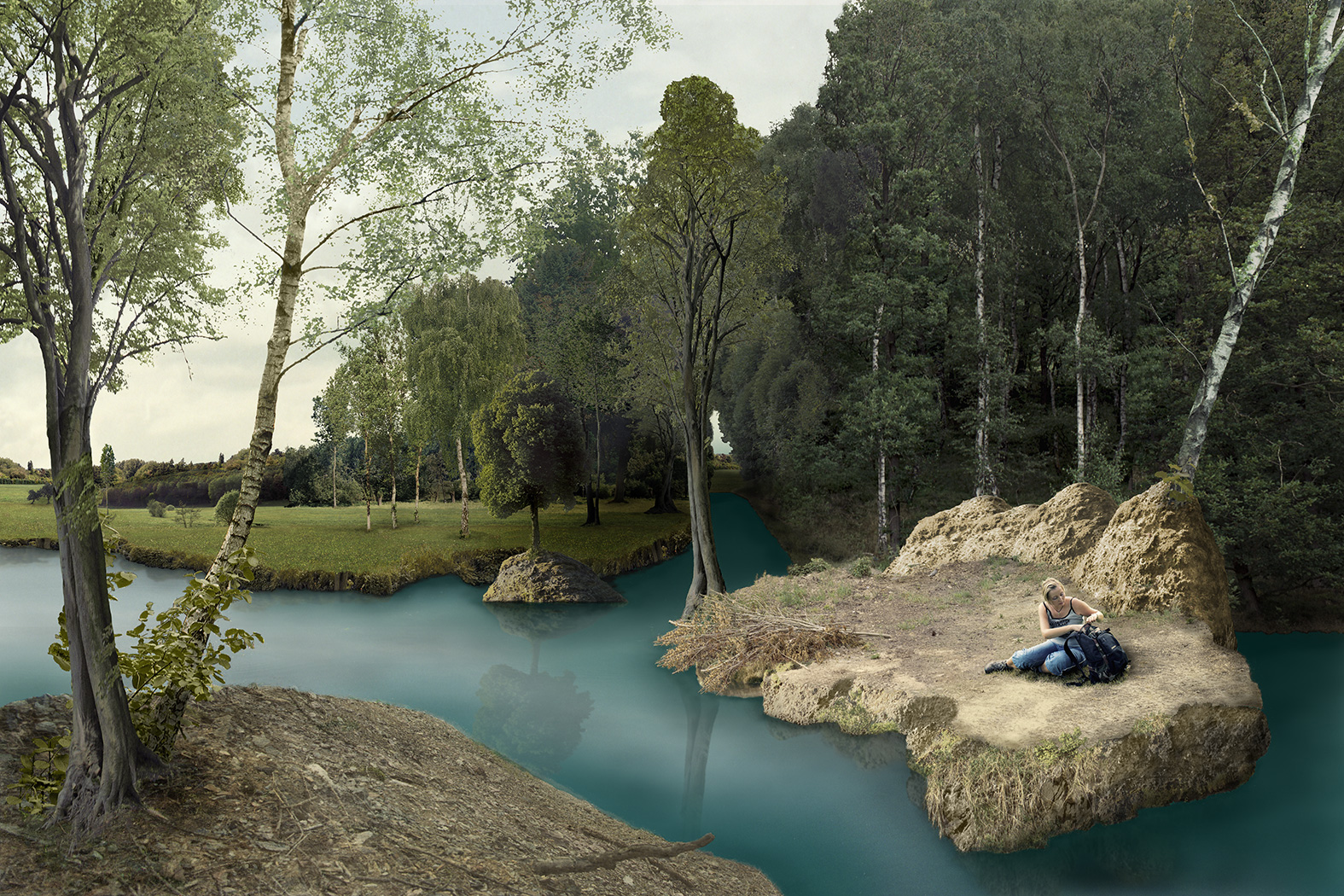 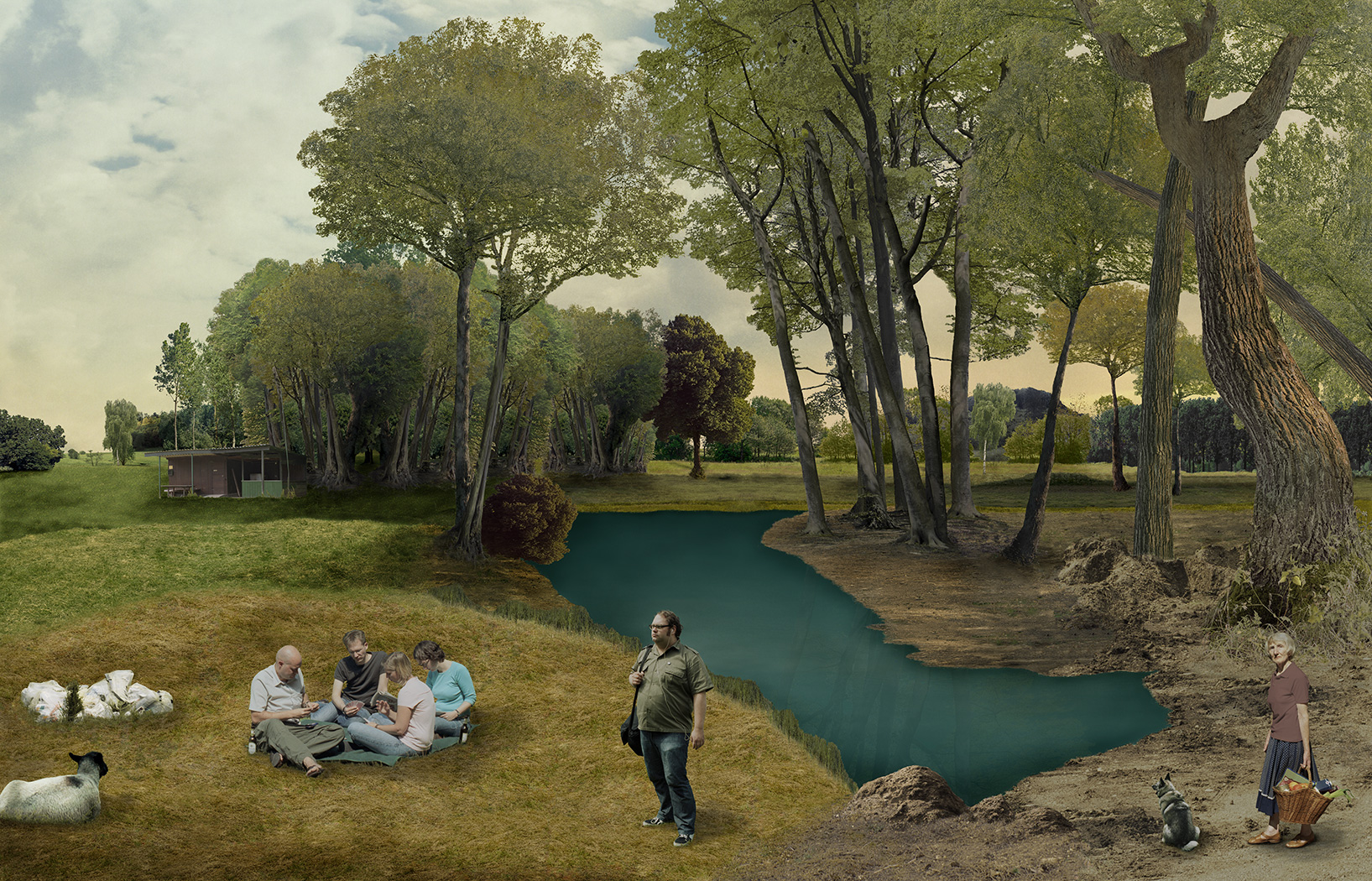